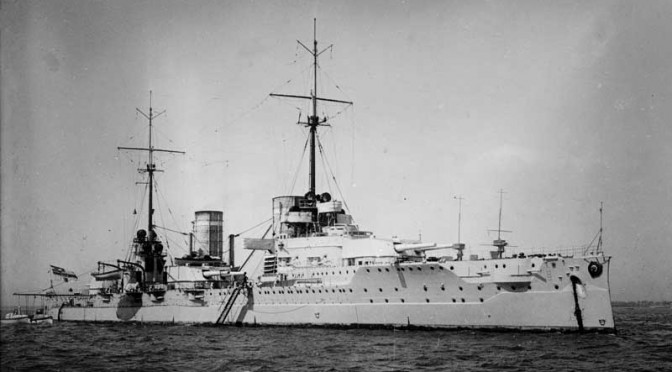 SMS Von der Tann was the first battlecruiser built for the German Kaiserliche Marine, as well as Germany’s first major turbine-powered warship. At the time of her construction, Von der Tann was the fastest dreadnought-type warship afloat, capable of reaching speeds in excess of 27 knots (50 km/h; 31 mph). She was designed in response to the British Invincible class. While the German design had slightly lighter guns — 28 cm (11 in), compared to the 30.5 cm (12 in) Mark X mounted on the British ships—Von der Tann was faster and significantly better-armoured. She set the precedent of German battlecruisers carrying much heavier armour than their British equivalents, albeit at the cost of smaller guns.

Design of Von der Tann began in August 1906, under the name “Cruiser F”, amid disagreements over the intended role of the new ship. Admiral Tirpitz advocated a ship similar to the new British battlecruisers of the Invincible class: heavier guns, lighter armour, and higher speed with the intention of using the ship as a fleet scout and to destroy the opposing fleet’s cruisers.

On 22 June 1907, the Kaiser authorized construction of Cruiser F, to be named Von der Tann, after Ludwig Freiherr von und zu der Tann-Rathsamhausen, a Bavarian general who fought in the Franco-Prussian War of 1870. The contract was awarded to the Blohm & Voss shipyard in Hamburg, on 26 September 1907. The keel was laid on 21 March 1908, and the ship was launched nearly a year later, on 20 March 1909. The ship cost 36.523 million Marks.

Von der Tann carried eight 28 cm (11.02 in) SK L/45 guns, mounted in four twin turrets: one fore, one aft, and two staggered wing turrets. The guns were emplaced in the Drh. L C/1907 turntable mount, which was traversed electrically, while the guns themselves used hydraulics to change elevation. The guns could be elevated up to 20 degrees, which enabled a maximum range of 18,900 m (20,700 yd).  The main guns fired a 302 kg (670 lb) armour-piercing shell that had a muzzle velocity of 875 m/s. A total of 660 projectiles were stored in four shell rooms, each containing 165 shells. The wing turrets were staggered in such a way that all eight guns were able to fire on broadside on a very wide arc.